Church of San Michele Arcangelo: all you have to know 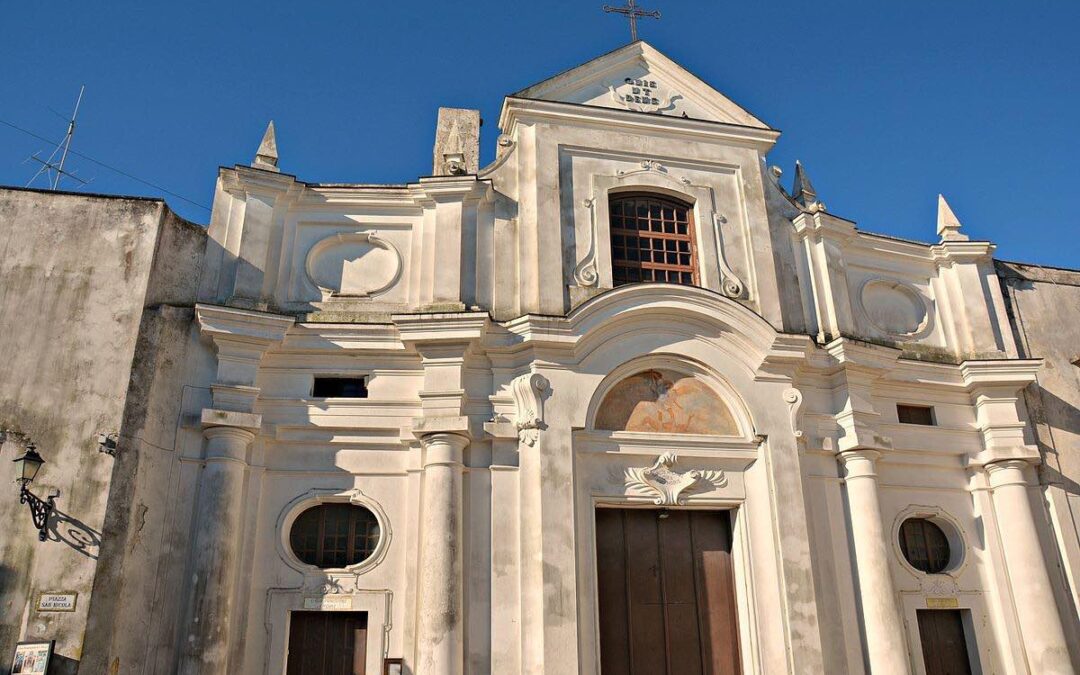 Roberto Pane, a historian and famous Italian architect, defined the Church of San Michele Arcangelo as “one of the most valuable examples of the entire eighteenth-century Neapolitan production”. Among the architectural wonders of the beautiful Anacapri, this one doesn’t just represents an important tourist destination, but also an essential stop for all art lovers.

The history of the church of San Michele Arcangelo: let’s discover it together

It was erected between 1698 and 1719 and it was Mother Serafina di Dio the one who strongly desired its construction. For those who do not know her, she is a religious woman from Capri, founder of the convent of the Teresiane, annexed to the building. Her request was born from a promise, from an oath she made to Saint Michael the Archangel: “If you free Vienna, I promise to found a church and a monastery in Anacapri, for the greater glory of the Lord and Your honor”.

The bishop of Capri, Michele Gallo, an exponent of the Neapolitan nobility, echoed her decision to be buried there, as testified by the marble epigraph preserved near the high altar. To make that he used his personal patrimony.

The Church, designed by the architect Antonio Domenico Vaccaro in full Baroque style, was built next to the pre-existing Church of San Nicola, from which derives the name of the current Piazza San Nicola.

During the English occupation of Capri (between the years 1806 and 1808), we witnessed the closure of monasteries and convents, as they were used as ammunition depots. It was Ferdinand I di Borbone who reopened it to be used as a place of worship.

The architecture of the Church of San Michele Arcangelo: the fundamental elements

The architect Antonio Domenico Vaccaro studied its architecture, thanks to an octagonal Greek cross map, covered by a dome. As soon as you cross the entrance, you get lost in the wonderful nave, embellished by a ceramic tile floor, hand-painted.

Every inch is a piece of extraordinary painting, a depiction of the expulsion of Adam and Eve from Paradise. A scene that takes place on the background of a lush environment, the sin of which they were guilty, made by the expert hands of Leonardo Chiaiese, in 1761, one of the most skilled majolica masters. The design was created, conceived and studied by the Italian painter Francesco Solimena. To admire it in its complete splendor, it’s possible to climb the spiral staircase at the entrance, to observe it from above, with a full and complete view.

The second element that captures both your eyes and mind, striking directly to the soul, is the fantastic high altar, donated by the Prince of San Nicandro in 1761. Made of white marble, by the “master marble worker” Agostino Chirola, who realized, in his famous workspace, a workshop in the center of Naples, the design strongly desired by the engineer Angelo Barletta.

How can we not appreciate, love and be thrilled in front of the two sculptures of white marble angels, at the side of the altar.

The third element, of no less importance, are the paintings of the well-known, famous and appreciated artists of the Neapolitan eighteenth century including:

Opening hours to visit the Church of San Michele Arcangelo

The Church of San Michele is located in Piazza San Nicola (whose name comes from the church of San Nicola). Normally, the opening hours are as follows:

It’s closed from November 27 to December 8.