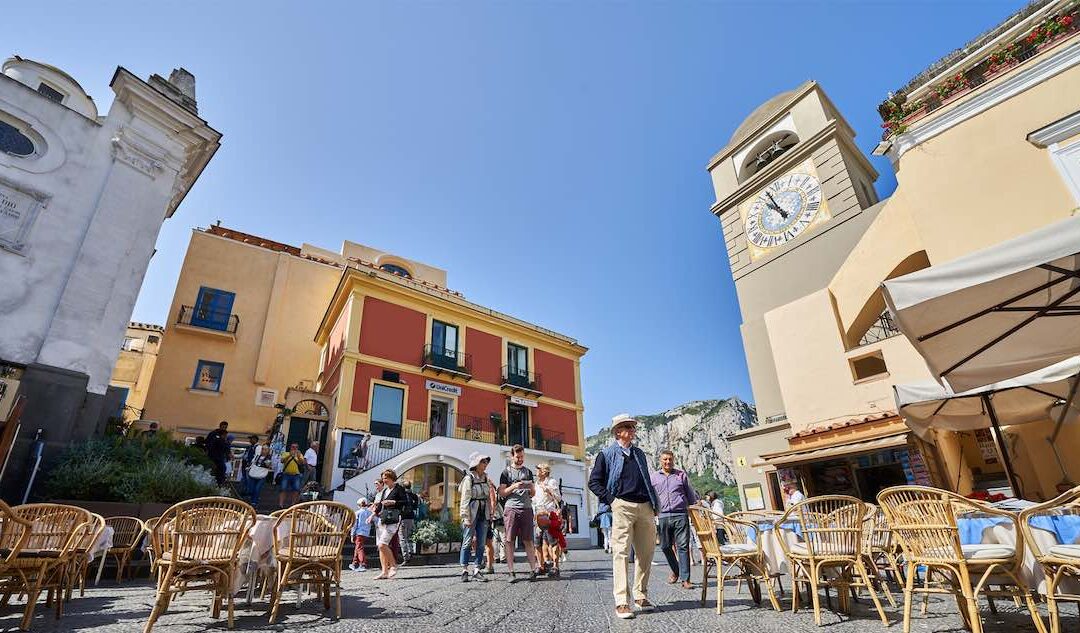 For many people it’s known as Piazza Umberto I, for others as the “famous little square” at the center of the island and those who live on Capri only call it one way: “a chiazz”. The true heart of Capri, the soul, the business card for anyone who decides to visit the natural wonder of the island. The Piazzetta has a very, very, ancient history, with a thousand nuances and traditions: let’s discover it together!

The history of the Piazzetta

The origins of the Piazzetta date back to the Greek age, when it was perched along the perimeter of the defensive walls that defended Capri from external attacks. All that remains of those walls today are the blocks which can be admired from the terrace of the piazza.

When were these walls destroyed? During the Roman age, in particular during the period of the Pax Romana: they were destroyed because they were considered useless.

The stones fallen from the walls were used by the inhabitants to better arrange their personal gardens. In that area of the island, Count Giacomo Arcucci decided to build his elegant residence, in front of Via Longano, near the Church of Santo Stefano and the Church of Santa Sofia, which will then be demolished. For its elevated position, this house kind of “upset” the architecture of the island and that’s why it was named, along with all the buildings that would arise from there in a short time, of the same size, “Case Grandi” (Big Houses).

The space between the various constructions delimited what is currently called the “piazzetta” (little piazza). This space was initially reserved for exercises in defense operations.

In the mid-seventeenth century, the island suffered a bad epidemic of plague and, that time too, the square had a crucial role: all the clothes of people infected by the disease were burned there and, as a symbol of rebirth, belief and religion, was built the votive chapel to San Sebastiano.

Later, the square became the site of the local market, religious processions and popular festivals.

The upgrading of the Piazzetta: from local market to heart of the island

In the nineteenth century, the square was the subject of some upgrading operations: the first pharmacy was opened and from there on it was “invaded” by many public exercises, which transformed it into the living room of the island, the business card for anyone who lands on the island.

The fundamental steps of this transformation were:

What to visit in the Piazzetta?

From the main stairs of the island it’s possible to reach the former cathedral of Santo Stefano and the Centro Caprense. Following this direction, you arrive at the oldest part of the island, through the narrow alleys and passing through the orange grove of the Teresiane.

At the corner, we find the Torre dell’Orologio (Clock Tower), the symbol of the Piazzetta, whose bells ring every quarter of an hour.

We also suggest you visit:

How to reach the Piazzetta?